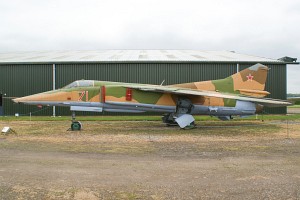 Photo ©: Karsten Palt
The Mikoyan Gurevich MiG-27 is a single-engine single-seat jet fighter bomber aircraft developed by the Soviet Design Bureau Mikoyan-Gurevich OKB.
The MiG-27 is a fighter bomber development of the Mikoyan Gurevich MiG-23. India was the largest operator beside the Soviet Union. Approx. 130 of the Indian Mig-27 were assembled by HAL in India.
- to top -