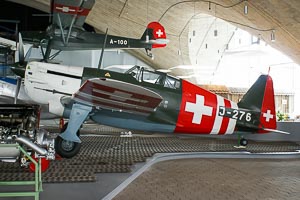 Photo ©: Karsten Palt
The Morane-Saulnier M.S.406 is a single-engine single-seat fighter aircraft produced by the French manufacturer Aéroplanes Morane-Saulnier.
The M.S.406 was also license-built in Switzerland as the Morane D-3800, D-3801 and D-3802.
- to top -