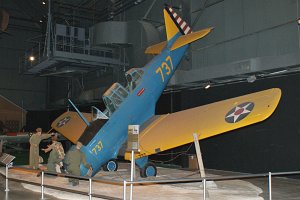 Photo ©: Karsten Palt
The North American BT-9 / BT-14 / NA-64 is a familiy of single-engine two-seat trainer aircraft with fixed landing gear produced by the US-American manufacturer North American Aviation. The US Navy Designation is NJ-1. The manufacturer's model designation is NA-19.
The BT-14 and NA-64 Yale differ from the basic BT-9 by having a longer all metal fuselage instead of the fabric covered fuselage together with some aerodymic improvements. BT-9 and NA-64 Yale are powered by a Wright R-975 engine. BT-14 is powered by a Pratt & Whitney R-985 engine. The German Luftwaffe operated a larger number of NA-57 (similar to NA-64 Yale) captured in France during WWII. The BT-9 (NA-16-4M) was also license built in Sweden by ASJA as Sk 14. Further development led to the North American AT-6 Texan.
- to top -