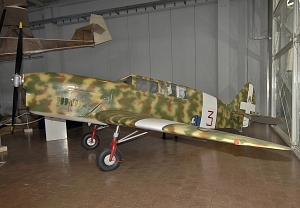 Photo ©: Aldo Bidini (photos at airliners.net)
The Nardi FN.305 is a single-engine two-seat trainer and liaison aircraft developed by the Italian manufacturer Fratelli Nardi and produced by Piaggio Aero.
FN.305B and FN.305C were single-seat variants (built in unknown numbers). The FN.305 was also produced under license by IAR in Romania.
- to top -