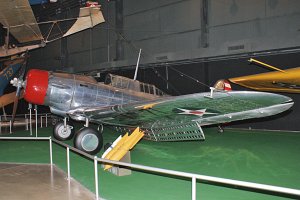 Photo ©: Karsten Palt
The Northrop A-17 resp. the Douglas 8A is a single-engine two-seat attack aircraft produced by the US-American manufacturer Northrop Corporation and later by the Douglas Corporation. A later variant was the Douglas A-33.
The Douglas 8A was also license-built by ASJA in Sweden designated by the Swedish Air Force B 5 (B 5A, B 5B, B 5C). The Douglas A-33 was powered by a more powerful engine and carried more weapons. The South African Air Force operated 60 A-17 designated as Nomad Mk I.
- to top -