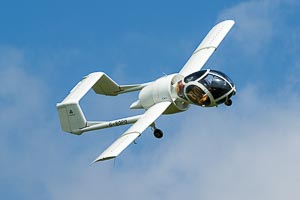 Photo ©: Karsten Palt
The Edgley EA7 Optica is a single-engine three-seat light observation and touring aircraft produced by the British manufacturer Edgley Aircraft, later Optica Industries and finally Brooklands Aerospace.
The engine of the EA7 drives a five-bladed fixed-pitch ducted fan, which makes the Optica to one of the quitest motor powered aircraft.
- to top -