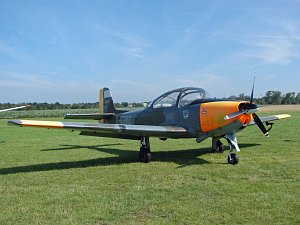 Photo ©: Karsten Palt
The Piaggio P.149 is a single-engine four-seat trainer and liaison aircraft produced by the Italian manufacturer Rinaldo Piaggio S.p.A. (today Piaggio Aero Industries S.p.A.). West-Germany's Luftwaffe was the, by far, largest operator of the P.149 (262 aircraft).
The Piaggio P.149 is a development of the smaller two-seat Piaggio P.148. The P.149D was licence-built by Focke-Wulf, Bremen/Germany for the West-German Air Force and Navy (190 aircraft).
- to top -