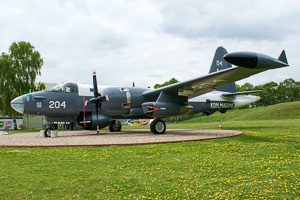 Photo ©: Karsten Palt
The Lockheed P2V/P-2 Neptune is a twin-engined long-range maritime patrol and anti-submarine aircraft produced by the US-American manufacturer Lockheed Corporation. The P2V was redesignated P-2 in 1962.
The last Lockheed built version of the P2V, the P2V-7/-7S (P-2H / SP-2H) is equipped with two additional turbojet engines. The turboprop-powered variant P-2J (P2V-Kai) was produced by Kawasaki in Japan. After their military service some Neptune were converted to civil firefighting aircraft.
- to top -