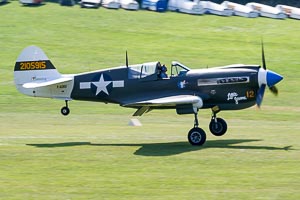 Photo ©: Karsten Palt
The Curtiss P-40 Warhawk is a single-engine single-seat fighter and ground-attack aircraft produced by the US-American manufacturer Curtiss-Wright Airplane Company. P-40 in service with the British Commonwealth and the Soviet Forces were called Tomahawk (P-40B, P-40C) and Kittyhawk (other variants).
The P-40 Warhawk is a development of the Curtiss P-36 Hawk (Hawk Model 75).
- to top -