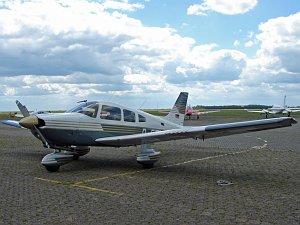 Photo ©: Karsten Palt
The Piper PA-28 Cherokee Series is a family of single-engine four-seat trainer and touring aircraft produced by the US-American manufacturer Piper Aircraft Corporation, later New Piper Aircraft and today Piper Aircraft, Inc..
The PA-28 was produced in several different variants. The PA-28-140 Cherokee Flite Liner / Cherokee Cruiser was a two-seat trainer variant. PA-28R variants are equipped with a retractable landing gear. The PA-28 was also license-built in Brazil by EMBRAER as the EMB-711 and the EMB-712 and in Argentina by Chincul SA. Total production of all PA-28 models until today (2016): >32000.
The PA-28 is still in production with current models Arrow (PA-28R-201 Arrow III), Archer (PA-28-181 Archer III), Warrior (PA-28-161 Warrior III) and the Archer DX which is powered by a Continental CD-155 (TAE 125-02-114 Centurion 2.0S) Diesel engine.
- to top -