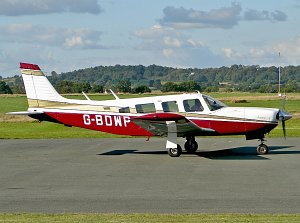 Photo ©: Robert Beaver (photos at airliners.net)
The Piper PA-32R Saratoga / Lance is a single-engine six- or seven-seat touring aircraft with retractable landing gear produced by the US-American manufacturer Piper Aircraft Corporation, later New Piper Aircraft and Piper Aircraft, Inc..
The PA-32R is a development of the Piper PA-32 Cherokee Six with retractable landing gear. The PA-32R was also license-built in Brazil by EMBRAER as the EMB-721 Sertanejo and in Argentina by Chincul as the PA-A-32R and PA-A-32RT.
- to top -