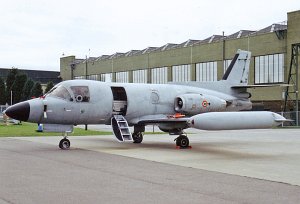 Photo ©: Karsten Palt
The Piaggio PD.808 is a twin-engined ten-seat corporate and utility aircraft developed by the US-American manufacturer Douglas Aircraft Company and produced by the Italian manufacturer Rinaldo Piaggio S.p.A. (today Piaggio Aero Industries S.p.A.).
Designed as a corporate aircraft, the PD.808 served as a military utility aircraft. All but two series aircraft were operated by the Italian Air Force (Aeronautica Militare). The PD.808 served as an electronic warfare platform also.
- to top -