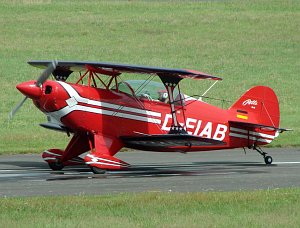 Photo ©: Karsten Palt
The Pitts Special is a single-engine one- or two-seat aerobatic biplane aircraft designed by Curtis Pitts. Most Pitts Special were home-built. Factory production was performed by the US-American manufacturers Pitts Aerobatics, Aerotek, Christen Industries and since 1991 by Aviat Aircraft, Inc.. The Pitts Special S-1 is the single-seater, the S-2 is the two-seat aerobatic trainer variant.
Plans for the S-1 and Model 14 are currently distributed by Steen Aero Lab while plans for other versions are sold by Aviat Aircraft.
- to top -