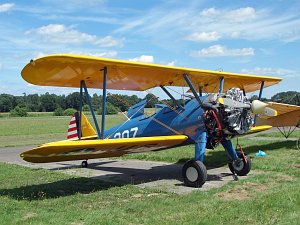 Photo ©: Karsten Palt
The Stearman Model 75 Kaydet is a single-engine two-seat trainer biplane aircraft produced by the US-American manufacturer Stearman Aircraft Company and later by the Boeing Airplane Company. PT-13 / PT-17 / PT-18 were the main-variants used by the USAAC, NS-1 and NS2S for the US Navy.
The Stearman 75 Kaydet was used by the US Army Air Corps and the US Navy as a primary/basic trainer aircraft. After WWII many Stearman 75 were used as crop-duster aircraft due to their slow and low-level flight capability.