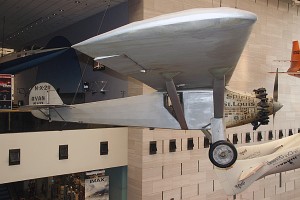 Photo ©: Karsten Palt
The Ryan NYP / Spirit of St. Louis is a single-engine single-seat special long-range aircraft produced by the US-American manufacturer Ryan Aeronautical Company designed by Donald Albert Hall.
The Ryan NYP - Spirit of St. Louis (Reg.: N-X-211) is the aircraft flown by Charles Lindbergh that made the first non-stop solo transatlantic flight on May 20/1927. This was also the first non-stop flight from New York to Paris. Lindbergh took off from Roosevelt Airfield in Long Island, New York and made a successful touchdown at the Le Bourget Aerodrome in Paris, France. The flight lasted 33 hours and 30 minutes for the distance of 3136 nautical miles (5808 km).
The Original Aircraft is on display at the National Air and Space Museum, Washington, DC.
- to top -