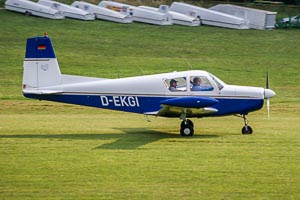 Photo ©: Karsten Palt
The SIAI-Marchetti S.205 / S.208 is a single-engine four- or five-seat light touring and liaison aircraft produced by the Italian manufacturer SIAI-Marchetti, today Alenia Aermacchi S.p.a.. The S.205 is the four-seat variant while the S.208 is the five-seat variant.
Approx. 65 S.205-22/R was also assembled by WACO in the United States and marketed there as the WACO Sirrus, later VELA S220. The total production numbers includes approx. 620 S.205 and 120 S.208 of which approx. 40 where military S.208M, operated by the Italian Air Force.
- to top -