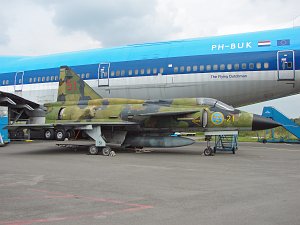 Photo ©: Karsten Palt
The Saab 37 Viggen is a single-engine single-seat supersonic multi-role combat jet aircraft produced by the Swedish manufacturer Saab AB. The Viggen was used as an interceptor (JA 37), ground-attack and fighter aircraft (AJ 37), photo-reconnaissance aircraft (SF 37) and maritime reconnaissance aircraft (SH 37).
The trainer variant was designated SK 37 and the later electronic warfare trainer SK 37E. The Swedish Air Force was the sole operator of the Saab 37.
- to top -