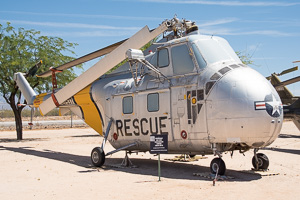 Photo ©: Karsten Palt
The Sikorsky S-55 is a medium single-engine utility helicopter with a capacity of max. 10 passengers built by the American manufacturer Sikorsky Aircraft. The military versions were the H-19 (US Air Force), HO4S (US Navy and Coast Guard) and HRS-1, HRS-2, HRS-3 (US Marine Corps).
Sikorsky built a total of 1281 aircraft of which 216 were civil helicopters. License production was carried out by Westland in England with a total of 477 helicopters. Further helicopters were license built by SNCASE in France and Mitsubishi in Japan. Some S-55 were later converted to a Turboshaft Engine variant with 650 shp and named S-55T.
- to top -