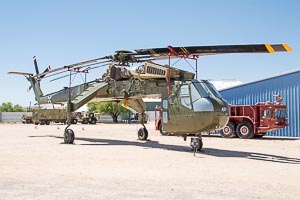 Photo ©: Karsten Palt
The Sikorsky S-64 Skycrane (CH-54 Tarhe) is a heavy twin-engined crane helicopter produced by the American manufacturer Sikorsky Aircraft. The US Army was the main operator of the S-64 with 54 CH-54A and 35 CH-54B.
In 1992 the American company Erickson Air-Crane took over the type certificate including all production rights from Sikorsky. Erickson renamed the helicopter Erickson S-64 Aircrane. The CH-54s were retired from Army service in 1995.
- to top -