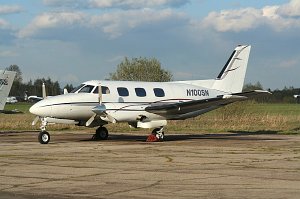 Photo ©: Nikolai Ionkine (Photos at airliners.net)
The Fairchild-Swearingen SA26-T Merlin II is a twin-engined ten-seat corporate aircraft with pressurized cabin and retractable landing gear produced by the US-American manufacturer Swearingen Aircraft, later Fairchild-Swearingen.
The total production of the Merlin II includes 33 Merlin IIA and 87 Merlin IIB. The SA26-T Merlin II is based originally on the Beech Queen Air using their wings and the landing gear of the Beech Twin Bonanza.
- to top -