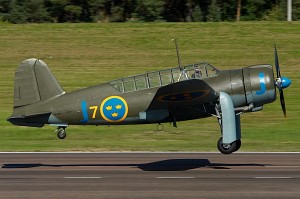 Photo ©: Jan Jorgensen (Photos at airliners.net)
The Saab 17 is a single-engine two-seat dive bomber and reconnaissance aircraft produced by the Swedish manufacturer Saab AB, Svenska Aeroplan Aktiebolaget, in service with the Swedish Air Force (Flygvapnet) during World War II. The bomber version was designated B 17 and the reconaissance version S 17.
The Saab 17 was Saab's first own aircraft project. The Saab 17 could be equipped either with wheels, skis or floats. The B 17A was powered by a Swedish built Pratt & Whitney R-1830-SC3G Twin Wasp radial engine, the B 17B and the S 17B by a Swedish built Bristol Pegasus XXIV radial engine and the B 17C by a Piaggio P.XIbis RC.400 radial engine.
- to top -