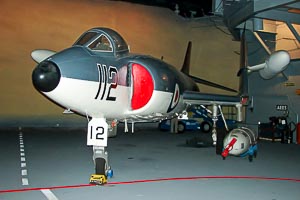 Photo ©: Karsten Palt
The Supermarine Scimitar is a twin-engined single-seat multi-role naval combat aircraft produced by the British Supermarine Division of Vickers-Armstrongs (Aircraft) Ltd.. The Scimitar was used as an interceptor, long-range reconnaissance aircraft and as a fighter bomber by the Royal Navy Fleet Air Arm.
- to top -