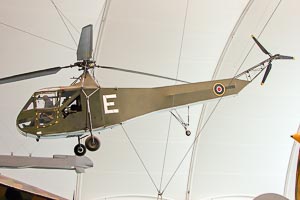 Photo ©: Karsten Palt
The Sikorsky S-47 is a light 2-seat single-engine military helicopter built by the American manufacturer Sikorsky Aircraft.. The S-47 was operated by the United States Army Air Forces as the Sikorsky R-4, by the US Navy and US Coast Guard as the HNS-1. S-47 in service with the Royal Air Force and Royal Navy were designated Hoverfly.
The Sikorsky S-47 was the world?s first mass production helicopter. It is a development of the experimental helicopter Vought-Sikorsky VS-300.
- to top -