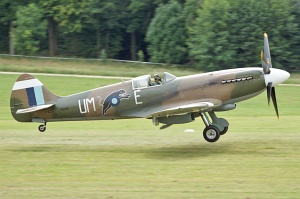 Photo ©: Karsten Palt
The Supermarine Spitfire is a single-engine single-seat fighter aircraft produced by the British manufacturer Supermarine Aviation Works (Vickers) Ltd, later the Supermarine Division of Vickers-Armstrongs (Aircraft) Ltd. The Spitfire was used by the Royal Air Force and allied countries during WWII.
The Spitfire was built in many variants with several wing configurations, engines and propellers. One of the variants is the Seafire, which is a carrier-based naval version. The total production numbers include 20334 Spitfire and additional 2556 Seafire in all versions. It is the British aircraft with the highest production numbers.