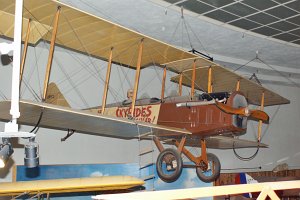 Photo ©: Karsten Palt
The Standard J is a series of single-engine two-seat trainer biplane aircraft designed by the US-American manufacturer Standard Aircraft Corporation operated by the United States Army Air Service during WWI. The Standard J was produced by Standard, Dayton-Wright, Fisher Body and Wright-Martin. The main production versions were Standard J-1 and SJ-1.
After the war, many Standard J-1 / SJ-1 were converted to the more powerful 150 hp Hispano-Suiza (so called Hisso) engine and were used for barnstorming, joy-riding and mail service.
- to top -