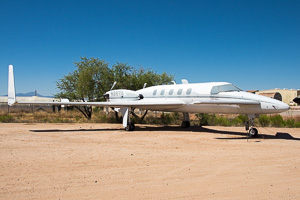 Photo ©: Karsten Palt
The Beechcraft Model 2000 Starship is a twin-engined turboprop corporate travel aircraft with retractable landing gear and pressurized cabin produced by the US-American manufacturer Beech Aircraft Corporation.
The Beech 2000 Starship passenger cabin is normally equipped with 8 passenger seats (2000A 6 seats). The Starship was a commercial failure with only 53 built aircraft including the three prototypes.
- to top -