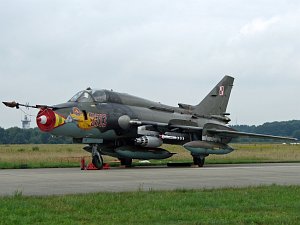 Photo ©: Karsten Palt
The Sukhoi Su-17 is a single-engine single-seat jet fighter bomber aircraft developed by the Soviet Design Bureau Sukhoi. The Su-20 is an export-variant of the Su-17. The Su-22 is an improved variant of the Su-20.
The Sukhoi Su-17 is a development of the Su-7. The Su-17 / Su-20 and Su-22 are equipped with variable-sweep wings on the outer wings only. The Su-17 and Su-22 were operated by the Soviet Union and later Russia. The Su-20 and Su-22 were exported to Afghanistan, Angola, East Germany, Egypt, Libya, Iraq, Iran, Peru, Poland, Syria, Vietnam, Yemen. West-Germany bought in 1984 two Su-20 from Egypt for evaluation purposes (Luftwaffe 98+61 and 98+62).
- to top -