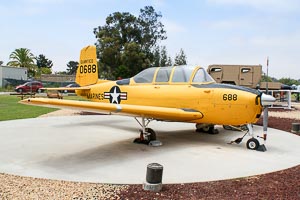 Photo ©: Karsten Palt
The Beechcraft Model 45 Mentor (T-34) is a single-engine two-seat trainer aircraft produced by the US-American manufacturer Beech Aircraft Corporation, today Hawker Beechcraft Corporation.
The Beech 45 Mentor was developed on base of the Beech Bonanza. The Beech Mentor was built as a piston-engined trainer aircraft between 1953 and 1959. Production of the Mentor resumed in 1975 and lasted until 1990 with the turbo-prop powered variant T-34C Turbo-Mentor. The Beech Mentor was also license-built in Canada by Canadian Car and Foundry, Japan by Fuji Heavy Industries and Argentina by FMA.
- to top -