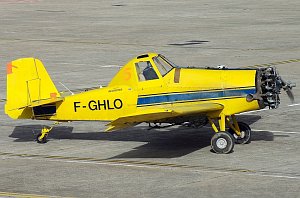 Photo ©: David Roura (Photos at airliners.net)
The Snow / Ayres S-2 is a single-engine single-seat agricultural aircraft developed by Leland Snow. Production was run by several US-American manufacturers. First Production as S-2 by Snow Aeronautical, later by Rockwell Aero Commander Division as S-2D Ag Commander. Then produced by Rockwell as Thrush Commander 600 & 800. Between 1977 and 2003 production by Ayres as S-2R / S-2R-T. Today in production by Thrush Aircraft as Thrush.
Until 2007 approx. total production of 1700 S-2.
- to top -