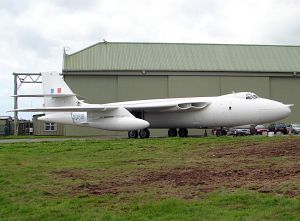 Photo ©: Robert Beaver (photos at airliners.net)
The Vickers Valiant is a four-engine subsonic long-range strategic bomber aircraft produced by the British manufacturer Vickers-Armstrongs. The Valiant was also used as aerial refueling tankers and as reconnaissance aircraft.
The Valiant was one of the three V-Bombers (Vulcan, Valiant und Victor) of the Royal Air Force.
- to top -