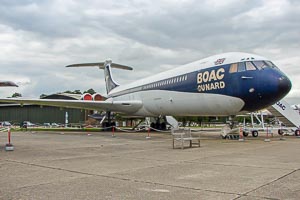 Photo ©: Karsten Palt
The Vickers VC10 is a four-engine medium- to long-range narrowbody jet airliner aircraft with a capacity of 109 to 174 passengers produced by the British manufacturer Vickers-Armstrongs, later by BAC - British Aircraft Corporation.
The variant Super VC10 (1151) has a stretched fuselage (+3,96 m / 13 ft), more powerful engines, different leading edges of the wings and an additional fuel tank. The Royal Air Force operated several VC10 as strategic transport aircraft and later also converted civil VC10 as air to air refueling tanker aircraft from 1965 until 2013. The military transport variant (Vickers Type 1106) differs from the civil airframe among others by having more powerful engines.
- to top -