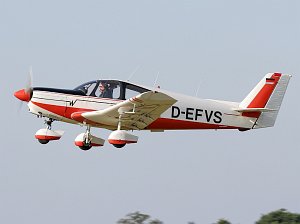 Photo ©: John Allan (Photos at airliners.net)
The Wassmer WA-50 is a light single-engine four-seat touring aircraft produced by the French manufacturer Wassmer Aviation. The WA-51 Pacific is the first production variant powered by a Lycoming O-320-E2A engine with 150hp (112 kW). The WA-52 Europa is powered by a Lycoming IO-320-B1A with 160 hp (119 kW). The third production model WA-54 Atlantic is the most powerful with a Lycoming O-360-A1LD engine with 180 hp (134 kW).
The WA-50 was the prototype aircraft with retractable landing gear. The Wassmer WA-50 was the World?s first all glass-fibre aircraft.
- to top -