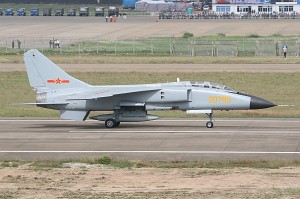 Photo ©: Bastian Ding (photos at airliners.net)
The Xian JH-7 is a twin-engined two-seat jet fighter bomber aircraft produced by the Chinese manufacturer Xian Aircraft Industry Corporation. The export version of the JH-7 is also known as the FBC-1 Flying Leopard. It is in service with the People's Liberation Army Navy (PLAN) and the People's Liberation Army Air Force (PLAAF).
- to top -