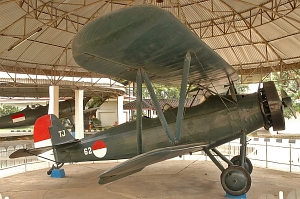 Photo ©: Peter de Jong (www.horizonten.nl)
The Yokosuka K5Y is a single-engine two-seat trainer biplane aircraft developed by the Naval Air Technical Arsenal in Yokosuka/Japan and Kawanishi. Production was held by several Japanese manufacturers like Kawanishi, Mitsubishi, Hitachi and Nakajima. The Yokosuka K5Y was exclusively operated by the Imperial Japanese Navy during WWII. Several captured aircraft were used after WWII by the Indonesian People's Security Force (Badan Keamanan Rakyat).
- to top -