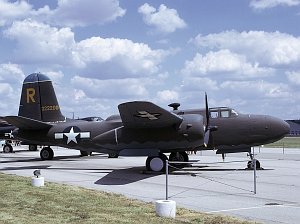 Photo ©: Steve Williams (photos at airliners.net)
The Douglas DB-7 is a twin-engined three-seat light bomber and night fighter aircraft produced by the US-American manufacturer Douglas Aircraft Company.
The DB-7 bomber variant in Royal Air Force service was called Boston, the night fighter variant Havoc. The DB-7 in United States Army Air Force (USAAF) service was designated A-20 Havoc. The A-20 Havoc was used in large numbers (approx. 2900 aircraft) by the Soviet Union (USSR). 380 DB-7 were assembled by Boeing.
- to top -