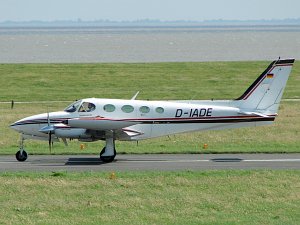 Photo ©: Karsten Palt
The Cessna 335 respectively Cessna 340 is a twin-engined six-seat light corporate aircraft with retractable landing gear produced by the US-American manufacturer Cessna Aircraft Company.
The Cessna 340 is equipped with a pressurized cabin. The unsuccessful (only 64 aircraft) Cessna 335 is unpressurized.
- to top -