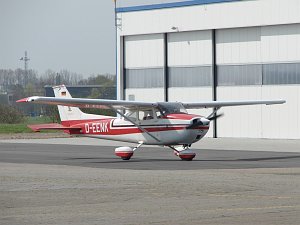 Photo ©: Karsten Palt
The Cessna 172 Skyhawk is a single engine four-seat light touring aircraft produced by the US-American manufacturer Cessna Aircraft Company, a subsidiary of Textron Aviation.
The Cessna 172 was in production by Cessna and Reims (France) between 1956 and 1986. Production resumed in 1997 as Skyhawk 172R and Skyhawk SP, based on Cessna 172B. No aircraft on the world was more often produced than the Cessna 172, until today (2010) more than 43000 Cessna 172 have been produced.
- to top -