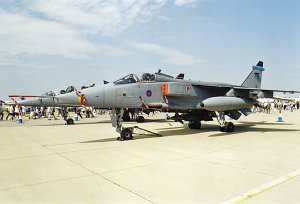 Photo ©: Karsten Palt
The SEPECAT Jaguar is a twin-engined single-seat fighter bomber jet aircraft for the close air support role produced by the British/French manufacturer SEPECAT, Société Européene de Production de l'Avion Ecole de Combat et d'Appui Tactique, a joint-venture of BAC, British Aircraft Corporation and Breguet (later Dassault-Breguet).
The main operators of the Jaguar were the French Air Force until 2005 with 160 Jaguar A and 40 Jaguar E two-seat trainer and the Royal Air Force until 2007 with 165 Jaguar GR.1 (Jaguar S) and 35 two-seat Jaguar T.2 (Jaguar B) trainer. The Indian Air Force received 160 Jaguar International of which 40 were built in UK and 120 by HAL in India as the Shamsher. The Jaguar was operated by Ecuador, Oman and Nigeria also.
- to top -