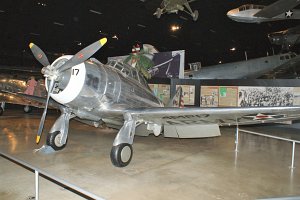 Photo ©: Karsten Palt
The Seversky P-35 is a single-engine single-seat fighter aircraft produced by the US-American manufacturer Seversky Aircraft Company (became later the Republic Aviation Corporation). 2PA, A8V1 and AT-12 Guardsman are two-seat variants of the P-35.
The Seversky P-35 was the US Army Air Corps with all-metall fighter aircraft with retractable landing gear and enclosed cockpit. The Seversky 2PA is a two-seat fighter and fighter-bomber variant. 20 2PA-B3 were operated by the Imperial Japanese Navy und the designation A8V-1. The AT-12 Guardsman is a trainer aircraft variant based on the 2PA.
- to top -