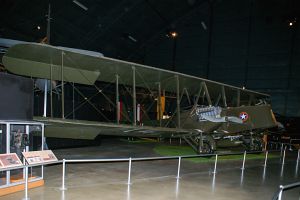 Photo ©: Karsten Palt
The Martin MB-2 is a twin-engine biplane bomber aircraft with a crew of 4 developed by the US-American manufacturer Glenn L. Martin Co.. The designation changed later to NBS-1 (Night Bomber Short range).
The Martin MB-2 was the first US-designed mass production bomber aircraft. It was produced by Martin, Curtiss, L.W.F. and Aeromarine.
- to top -