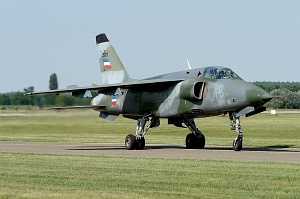 Photo ©: Roel Reijne (www.foto-expositie.nl)
The SOKO J-22 Orao resp. the IAR-93 is a twin-engine single-seat fighter bomber jet aircraft produced by the Yugoslav manufacturer SOKO together with the Romanian IAR (CNIAR), Industria Aeronautica Romana (also known as Avione Craiova S.A.).
The SOKO J-22 Orao was operated by the Yugoslav Air Force only. The Romanian Air Force was the sole operator of the CNIAR IAR-93. Twin-Seat variants of J-22 and IAR-93 were available. The more advanced variants J-22(M) Orao 2 and the IAR-93B are equipped with afterburner engines. As of today (2014) it seems that the Air Force of Serbia has still some J-22 Orao in operation.
- to top -