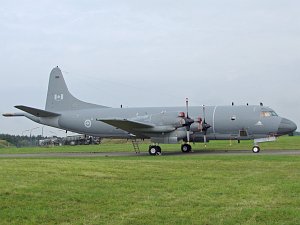 Photo ©: Karsten Palt
The Lockheed P-3 Orion is a four-engine long-range maritime patrol and anti-submarine aircraft produced by the US-American manufacturer Lockheed Corporation.
The P-3 Orion is a development of the commercial airliner Lockheed L-188 Electra. The P-3 was also licence-built by Kawasaki in Japan.
- to top -