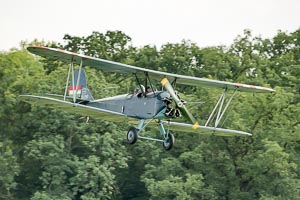 Photo ©: Karsten Palt
The Polikarpov Po-2 initially named U-2 is a single-engine two-seat utility biplane aircraft developed by the Soviet Design Bureau OKB Polikarpov. The U-2/Po-2 was used as a trainer, passenger, ambulance and agricultural aircraft and as a military ground attack, reconnaissance and liaison aircraft.
The Polikarpov Po-2 / U-2 is one of the world's most produced aircraft ever. The Po-2 was license-built in Poland after WWII as the CSS-13 and the CSS S-13.
- to top -