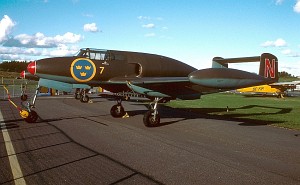 Photo ©: Erik Frikke (photos at airliners.net)
The Saab 21R is a single-engine single-seat jet fighter and ground-attack aircraft produced by the Swedish manufacturer Saab AB, Svenska Aeroplan Aktiebolaget. The Saab-21R was designated J 21R and J 21RB by the Swedish Air Force (Flygvapnet). After a short time in service as fighter aircraft all Saab-21R were converted to ground-attack aircraft under the designation A 21R and A 21RB.
The Saab-21R is a development of the Saab-21 with a de Havilland Goblin 3 turbojet engine.
- to top -