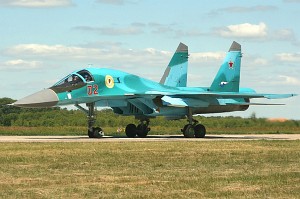 Photo ©: Dmitry Shirenin (photos at airliners.net)
The Sukhoi Su-34 is a twin-engined two-seat jet fighter bomber aircraft produced by the Russian manufacturer Sukhoi JSC. The Su-32 is the export designation of the Su-34.
The Su-34 is a development of the Sukhoi Su-27. Although the Su-34 was first flown in 1990 it did not enter service before 2014.
- to top -