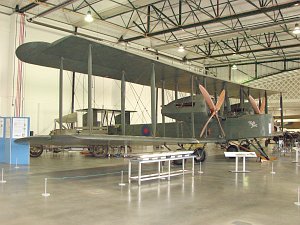 Photo ©: Karsten Palt
The Vickers Vimy is a twin-engined bomber biplane aircraft with a crew of three produced by the British manufacturer Vickers Limited. The military Vimy was not operational in WWI.
The Vickers Vimy was also built for civil operations as the Vimy Commercial. A military transport version was the Vickers Vernon in service with the Royal Air Force. Several Vimy Commercial were exported to China where some of them were later converted to bombers again. Several Vimy aircraft were used for long-range record flights. In June 1919 a Vickers Vimy was used for the world?s first non-stop transatlantic flight from St. John?s, Newfloundland to Clifden, County Galway, Ireland.
- to top -