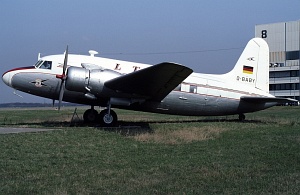 Photo ©: Paul J. Hooper (Photos at airliners.net)
The Vickers VC.1 Viking is a twin-engined short-range airliner with a capacity of up to 24 passengers produced by the British manufacturer Vickers-Armstrongs.
The VC.1 Viking was the first British passenger plane built after WWII. The Viking based in parts on the Vickers Wellington using parts of its wings, the engines and the landing gear. Viking variants 3 / 3A and 3B were able to carry 36 passengers.
- to top -