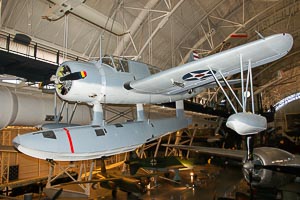 Photo ©: Karsten Palt
The Vought OS2U Kingfisher is a single-engine two-seat observation aircraft produced by the American manufacturer Vought Sikorsky Aircraft, later by the Vought Division of United Aircraft Corp.. The Kingfisher was the primary ship-based observation aircraft of the US Navy during WWII. Most OS2Us operated in the Pacific Theater where the main role was to rescue downed airmen.
The OS2U Kingfisher could also be operated in a landplane configuration with a wheel landing gear.
- to top -