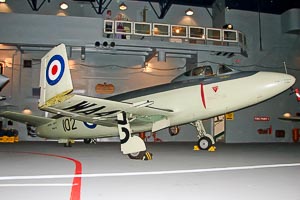 Photo ©: Karsten Palt
The Supermarine Attacker is a naval single-engine single-seat jet fighter and fighter bomber aircraft produced by the British manufacturer Supermarine Division of Vickers-Armstrongs (Aircraft) Ltd. The Attacker was the first jet fighter aircraft of the Royal Navy Fleet Air Arm.
The Attacker was operated by the British Royal Navy and the Pakistan Air Force (36 Type 538 Attacker).
- to top -