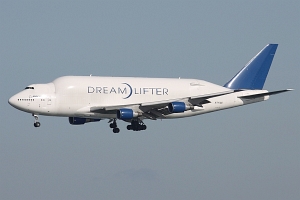 Photo ©: Ben Wang (photos at airliners.net)
The Boeing 747-400 LCF Dreamlifter is a four-engined Oversize-Cargo Freighter modified from civil airliner 747-400 produced by the US-American manufacturer Boeing.
The 747LCF is a variant of the Boeing 747-400 with an enlarged fuselage and a swing tail cargo door. The winglets are removed. Four used civil airliner 747-400 were modified by Evergreen Aviation Technologies Corporation. The 747LCF is operated by Atlas Air exclusively for Boeing, no other operation allowed by certification. The cargo compartment volume is 1.840 m³ / 65.000 ft³.
- to top -